Good News! According to Google Unicode is used on almost half of the Internet pages, which makes it a global text encoding of choice. Google uses version 5.2 of Unicode, which represents a wide range of characters from Egyptian Hieroglyphs, to most living languages including Hebrew, Arabic, Chinese, and Zulu. 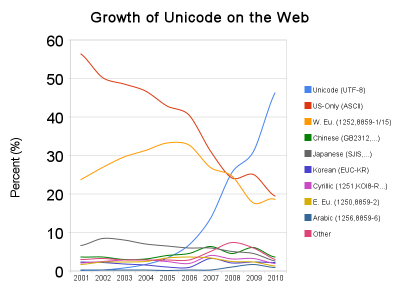 ASCII, which once dominated the web is down to 20% and it is probably because of pages that have not been updated in the last several years.